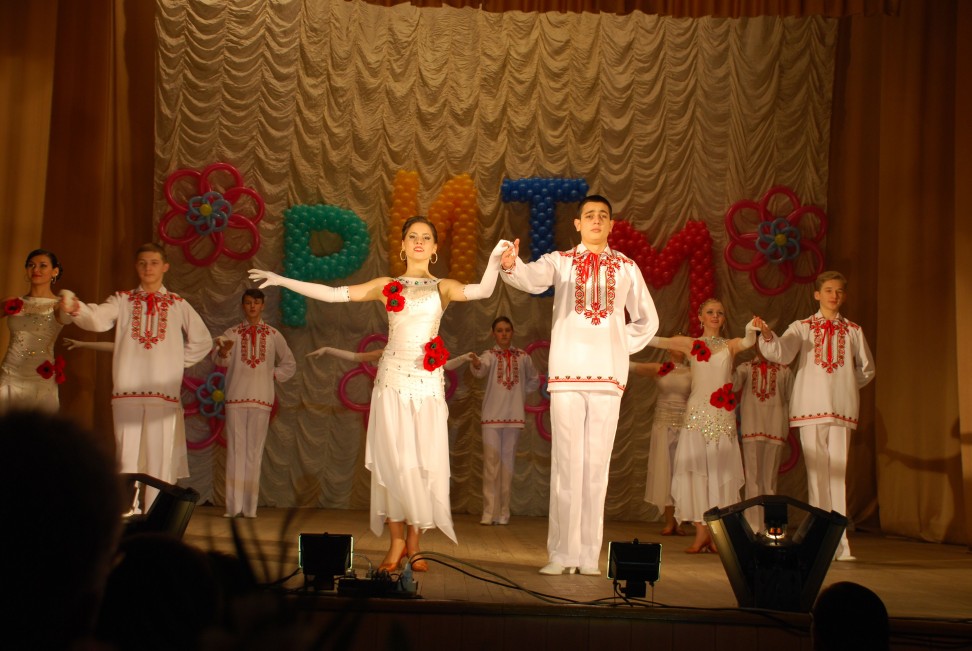 In Culture House of town of Nizhin was celebrated the 35th anniversary of Children’s dance ensemble of town of Nizhin “Rhythm” on 21 of February, 2015. The ensemble dance “Rhythm” had worked fruitful for the good of the city Nizhyn and his community, were glorifying with honor Chernihiv district and Ukraine and has the honorary title of “exemplary” due to achievements in culture and the arts for 35 years. Galina Tymoshenko  is leader of choreographed school Nizhin town, Honored Worker of Culture of Ukraine, leader of the ensemble dance “Rhythm” and exactly she has contributed to discovering new ways for development. Ensemble “Rhythm” has produced many talented graduates during the time of its existence, it is difficult to list all, but there are  “star”- persons from Germany, Israel, USA.

There were a lot of willing to greet managers and head Choreographed school of Nizhin town Galyna Tymoshenko, the hall was full, there were many flowers and pleasant words.

Graduates ensemble “Rhythm” 1988 of release showed their pride and thankful using warm and marvellous words and gifts. Those who were unable to attend and sent their greetings to congratulate the video from Germany, Israel.

Words of thanks and best wishes were heard all anniversary concert. The head of ballroom ensemble “Chance” Irina Miroshnick, was graduated ensemble “Rhythm” came on the stage to greet head and managers with her team.

Representatives of Executive Committee, Department of Culture of Nizhin and Regional Administration came on the stage to express their congratulations to head and managers of ensemble.

Anatoliy and Nataliya Kopytsya are owners of private enterprise of producing soft toys “Kopitsa” was General sponsor of the organization. Representatives of private enterprise “Kopytsya”  congratulated on the anniversary  the head of Choreographed school of Nizhin town Timoshenko Galina, teachers, and wished inspiration, creative success and brilliant victories and many beautiful performances.